My co-artist photographer Mick Lord and I were very proud of this exhibition. The juxtaposition between Mick’s photographs and my sculptural interpretation of them, and my travels in Andalusia was magical.

Through sepia photographs and rich textured sculptures Ellen Appleby (ceramicist) and Mick Lord (photographer) bring into focus the lime washed walls, weathered stones, archways and religious contradictions of southern Spain, Portugal and into the Anatolian peninsula. These artists are interested in the juxtaposition of remnants of Romans, Moors, Moslems, Jews and Christians seen in this area and the imposition of Catholicism, as well as the architecture of modern day Turkey where Mary spent her final years. Their exhibition is called “Land of the Most Holy Mary” which the common name for Andalucía in Southern Spain. It is on at the Pomona Railway Gallery, running from March 19th until April 19th with an opening on March 19th at 2.00pm.

In this exhibition, Mick’s photos have a documentary aspect about them. They reflect his interest in the built environment and architecture.   Each photo is a statement of fact – it is about the “thing”, the building, its shape and textures. The built form is the product of cultures and religions, past and present.

Ellen’s clay sculptures pay attention to the crumbling walls and stairs seen through decorated doorways. She builds porcelain towers with ornate faded decoration and highlights the contradictions as nuns scuttle past Islamic doorways and windows. There are references the Catholic iconography sitting within Islamic archways in La Mezquita in Cordoba, and other unexpected alliances. 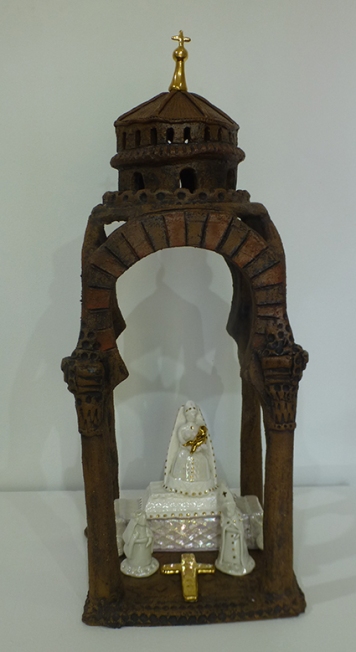 Mary in the Mezquita

Mary in the Mezquita 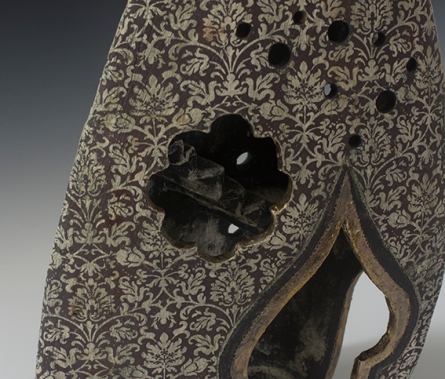 Alleyway with the photographic inspiration 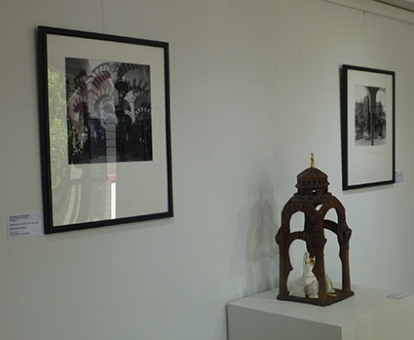 Mary in the Mezquita and photographs of the mosque

Mick in the gallery

Nuns in the Islamic arches